Below is the final report for the greywater reuse project that was conducted in HSB Living Lab which was partly financed by HSB Living lab research fund and partly Boverket (dnr.6479/2018). The outcome of the project is to be  publicly disseminated which is why I publish it here.

The project is unique since bathroom greywater was collected, treated and reused as hot tap water in showers and bathroom sinks.

We started the project installation January 2019. The project was split into phase 1 and phase 2 due to the regulatory barriers and/or legally unclear demarcation within  PBL /BBR, which made the local license from the municipality was obtained

We typically use 100-200 litre domestic water per day and person and 0.5-1 MWh per year for producing hot water. The future of real estate development most certainly includes water reuse or reutilization schemes, which will in most cases significantly reduce the water and energy footprint of the building. Preparing for and installing one of our systems for greywater reclamation is a value addition to your property.

We have installed and successfully demonstrated the safe operation of an in-building greywater recycling system. By collecting water from bathroom sinks and showers in eight shared bathrooms in HSB Living Lab and subsequentially treating and cleaning the water to better-than drinking water quality we were able to reuse as the water for shower purposes as hot water in two shared bathrooms. This recycling allows for 80-90% water savings for sink and shower use, depending on the amount of cold water mix-in.

Modelling show that the approach demonstrated here can potentially save approximately 55% of the domestic hot water and 40% of total domestic water, where the final number will depend on consumption patterns.

Furthermore, measurements in HSB Living Lab has shown a 50% reduction in energy consumption for sink and shower hot water. All the above was achieved while maintaining high user comfort and satisfying experience.

By spearheading the transition towards the built environment circular water you ensure that your company environmental profile will be strengthened, creating additional value and if you are a property developer this will give you a competitive edge.

In phase 2, purified water from the treatment plant will be returned as hot water to two showers in one cluster on level 2. In this phase, the plant will be supplemented with sensors / sensors for to be able to monitor the system’s function in real time. Sensors for measuring conductivity, pH, redox potential and turbidity will be used. This provides monitoring of the system severing activity. As a further barrier against pathogens, the purified water will also be treated low-intensity chlorination before returning it.

Greywater from showers and sinks were conducted in separate pipes to the treatment plant.

In phase 1 of the project, the purified water was been discharged to the existing drain from the property. In phase 2, pipes were installed to carry purified water back to two showers in a cluster on the second floor. In order to be able to return the water, a pump and a flow heater were installed to heat the treated water. Principle for connection of purification plant and installation of water return pipe is as shown below. The pump and flow heater, shown in the principle sketch below, were only in operation during experimental campaigns. The flow heater heated the purified water before it was returned as hot water.

To facilitate process monitoring a series of sensors, including pH, conductivity, oxidation and reduction potential (ORP) and turbidity, were installed in the treatment system as shown in Figure 1. This allowed a continuous assessment of system performance and were also used as a basis for system automation. Together with the sensors a new PLC was installed and integrated with existing control systems. 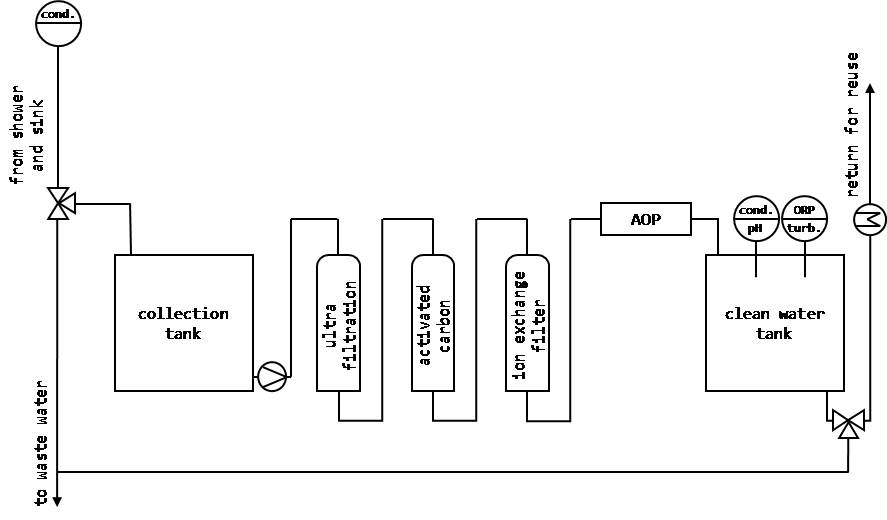 Figure 1. Schematic description of the treatment system installed in phase 2.

To ensure system integrity and user safety a pneumatic automatic valve was installed to enable bypass of the treatment system if control parameters for the greywater exceed certain values. In such cases the greywater was directed to the municipal wastewater system.

The connection to the existing hot water system were done in the water distribution hub as shown in  Figure 2. Manual ball-valves allowed operators to switch between mains hot water and recycled hot water for two showers. The recycled water was returned as hot water with a nominal temperature of 42 °C. 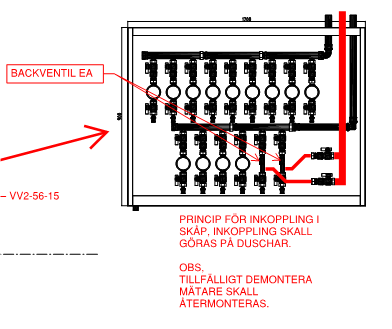 Figure 2. Schematic description of installation in distribution central on floor 2.

During the project period key performance parameters of water quality was monitored and found to be within target values, and thus deemed to fulfil the security requirement for safe reuse. As seen in Figure 3 key parameters were mostly within drinking water quality standards, with the exception of total organic carbon (TOC) and coliform bacteria. The average value for TOC barely exceeded the quality criteria for drinking water but was deemed safe for the intended purpose. Microbial samples typically returned blank (no microorganisms detected) but on two occasions coliform bacterial and L.pneumophila were detected. Subsequent samples were blank; thus, the two positive samples were deemed to be non-representative, due to either sampling or handling errors, or ties to specific perturbations in the treatment system (e.g. maintenance and cleaning).

On the 26th of September 2019 a total of seven invited people were the first to officially test showering in HSB Living Lab using only recycled hot water. Out of the seven there were one female and one tenant in HSB Living Lab. Showers took place between 10 a.m. and 3 p.m. All participants were asked to sign a disclaim agreement before the test. After completion of the test they were asked to fill out a survey. The result of the survey is discussed below.

In the shower event seven participants were asked to complete a survey to assess attitudes and experience of using recycled water for showering. The response rate was 100%.

Respondents generally agreed to the statement “I’m generally interested in reducing my own environmental footprint” (x̅ =9.0, x̃ =9). The attitude towards local greywater reuse and for outdoor irrigation is also very positive (x̅ =9.4 and 8.4, x̃ = 10 and 9). The participants disagreed (x̅ =1.1, x̃ =1) to the statement “I experienced discomfort when showering in reused water”. When asked “I would accept the installation a similar system in my home” there was a strong agreement (x̅ =9.7, x̃ = 10).

Figure 4. Graphs showing the respondent scores for questions 1-5 in the shower event survey.

The next subset of statements (likert scale 1-7) investigated the rationale for the opinion on reusing greywater for sink and shower. The results are rather homogenous, and it appears that health risks (x̅ =2.5, x̃ =2) and a concern over what the reclaimed water could contain (x̅ =2.5, x̃ =2) were not factors of great concern. The “yuck-factor” (“I find it disgusting or repulsive”) was not so expressed in this group of respondents (x̅ =2.0, x̃ =1). Participants strongly agreed with the statement “I think it is acceptable considering the environmental benefit” (x̅ =6.8, x̃ =7) and also strongly agreed with “I’m prepared to change my habits to facilitate reuse of greywater” (x̅ =6.1, x̃ =7). As in Survey 1, it is worth noting that statements were not further specified. This means that the level of agreement to the ill-defined statements also reflect on the respondent interpretation of the value statement.

Figure 5. Graphs showing the respondents scores for questions 6-12 in the shower event survey.

The system energy performance was investigated in a separate experiment on January 7th 2020. In this experiment water was recirculated continuously through the system and one shower on floor 2. The experiment lasted for approximately two hours. The temperature profile of the recirculated water is shown in Figure 6. 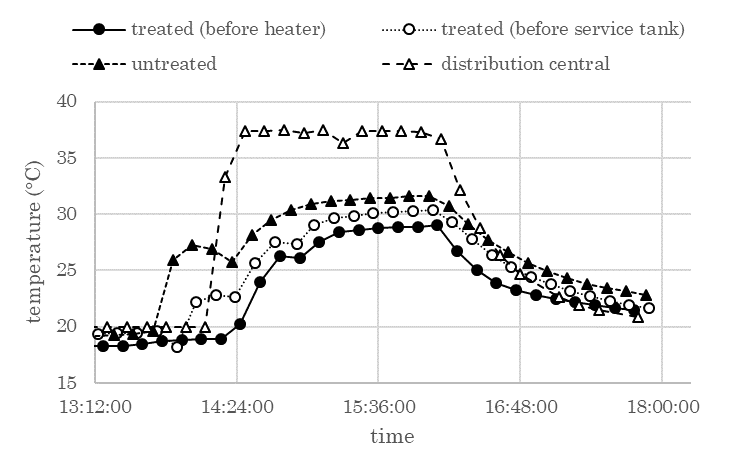 The electrical energy consumption for all components in the treatment system were measured and recorded for the duration of the experiment and it was concluded that an energy reduction of 50-55% was achieved compared to the traditional production of domestic hot water. It was also clear that further savings are possible by system optimization, e.g. by reducing parasitic loss and thermal insulation of pipes and tanks.

There were no significant deviations from the planned timeline.

Because of substantially lower financing we had to allocate the funds as follows; the HSB LL fond grant was used exclusively for consulting support and some plumbing work. Payroll and materials were paid by funds from the NVV, BV and by own input.

It was demonstrated that reclaimed greywater from sink and shower can safely be reused for shower hot water using an in-building treatment system. It was shown that user experience was not negative in comparison with domestic hot water (DHW) in terms of water quality (aesthetic experience), and that the evaluated temperature of 42 °C was found to be adequate for user comfort. The only negative comment concerned water pressure, which was experienced as lower than for the typical shower.

The results from the present project will serve as a demonstration of the feasibility of the concept of local greywater recycling for hygiene purposes. This will enable further development and increase the technology readiness level. Graytec AB can use these results to consolidate their product and service portfolio and use them in negotiations with customers that look to incorporate the technology into their projects.

Part of the results we be published in scientific journals by Jesper Knutsson (Chalmers university of technology). Manuscript is in preparation.

We have been invited to be part of two large projects where we will reclaim greywater. We are also in discussions with two more projects internationally which includes UN and China.
There is a large interest to find new ways of re-use water and our project is showing project owners, building owners, municipalities and others that it is possible and a viable way to save water and energy.

We are looking at possibilities around certain parts of what we do at HLL. Patent application is in progress and additions have been made after each project status.

We have already been part of publications and we are speaking about this in different seminars and planning seminars with SIS in the autumn and  other event is waiting for the clarification for pandemic, of the conditions for implementation.

Jesper Knutsson (Chalmers) and Andreas Karlsson (BD) has written some interesting reports. There are a large Formas project that KTH is running, where our project at HLL is a reference and it will be published next year.

If possible we will measure effect repatriation even after the completion of the project, depends of publicity and resources to follow up.

Recommendations and any additional research

Further research on long term microbial performance is needed to ensure that operational conditions and parameters are maintained. Separate project application has been submitted to FORMAS for this purpose. If funding is granted a 3 year research project will improve knowledge about microbial growth and control.

Furthermore, a 4-8 week continuous study of user acceptance and system interaction would greatly enhance the understanding on how users respond to greywater reuse systems as presented here.

This project has demonstrated the feasibility of on-site treatment of greywater and local reuse for showering, through a hands-on proof-of-concept demonstration. The quality of the treated greywater is better than, or similar to that of drinking water as regulated by national quality criteria. A survey of test subject experience showed that overall use satisfaction was high.

Per Ericson Graytec AB: When I applied for this project in 2017, I had a drawing and an idea and was unsure how it would come together. Fortunately, I met some people that like me, believed in doing things differently to make this world better.

We had some problems get off the ground but now, two and a half years later, we have a working pilot and we are, together with some of the best research facilities and companies in Sweden, showing the world that this is a viable idea and the future in water recycling. The interest we are receiving is extensive and I am very humbled by this and it inspires me to work hard to bring this to market without too much delay.